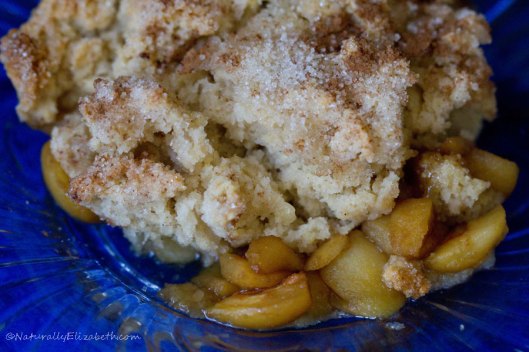 Last week a friend of mine gave me a bunch of loquats from her organic yard.  I had never had a loquat before, so I was up to the challenge of working with them.  She suggested cobbler, so that was my plan.

What I discovered is that loquat translates into “a whole lot of work.”  Wikipedia says that loquats have a 30% or more waste ratio, and I’d say it was more with the small loquats we had.  It took me well over an hour with my youngest son helping me for part of the time to get the 3 cups of peeled and seeded  loquats we used in this recipe.  They started out as 6 or 7 cups of loquats before the preparation.  In addition, they turned my fingers very brown– almost worse than cherries!

The loquats are good both raw and cooked.  My son and I thought that they tasted a lot like plums.

Because of how much work it was, this may be a “once in a lifetime” recipe. 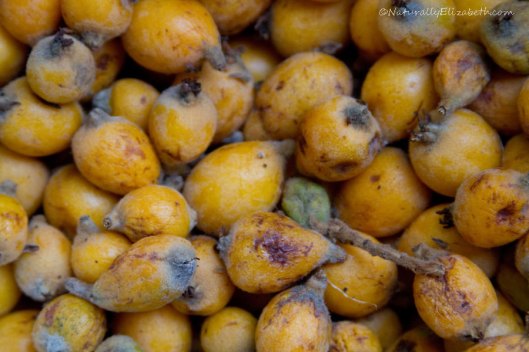 In a large bowl, combine flours, starch, xanthan gum, 1 tablespoon sugar, baking powder, and salt. Cut in shortening until mixture resembles coarse crumbs. Add rice milk, vanilla and egg; stir thoroughly.  Remove loquat mixture from the oven, and carefully spread topping across the top.  It will be thick. Sprinkle the top with remaining 2 tablespoons sugar mixed with the cinnamon.

Bake in preheated oven for 21-23 minutes, or until top is golden brown.

*While almonds are not technically nuts, they carry a cross-contamination risk with other tree nuts due to factory processing.  To make this nut free, substitute millet flour for the almond meal.