On Saturday morning, the kids and I went to Whole Foods to do some grocery shopping.  There in the produce section we found nirvana:  Organic peaches are back!  We were perhaps a tad bit too happy about their return, but my older son and I are convinced that fresh peaches are one of the best parts of life.  I once offered to make him a peach cobbler out of frozen peaches when he was asking for one in November, and he declared that to be blasphemy.  I have to agree.  Frozen peaches aren’t even close to the fresh ones.

Since they are the first peaches of the year, we didn’t buy a ton because I was worried they wouldn’t be good yet, but they were heavenly.  We ate a bunch of them raw, and then the boys insisted on cobbler with the rest.  I only had enough to make a half cobbler (baked in an 8” x 8” pan), but they were happy with that. 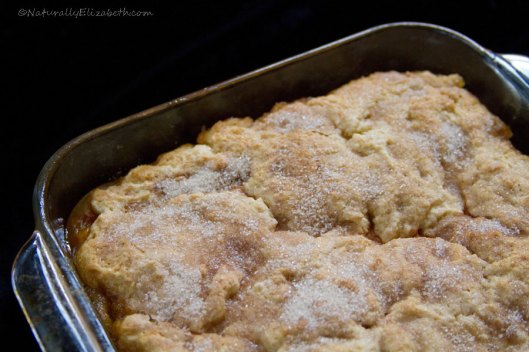 Mix together 1/2 cup sugar, ½ cup sucanat, peaches and almond extract. Place the peaches mixture in the prepared baking dish.  Place in preheating oven while making the rest of the batter.

In a large bowl, combine flours, 2 tablespoons sugar, baking powder, and salt. Cut in shortening until mixture resembles coarse crumbs. Stir in milk and egg.  Carefully remove the peach mixture from the oven and spread the batter over the hot peaches.  It will be thick.  Sprinkle the top with remaining 4 tablespoons of sugar mixed with cinnamon.

Bake in preheated oven for 25 minutes, or until top is golden brown.

*Omit the almond extract for a nut free version.