I’m currently eating a very low nightshade diet to help reduce inflammation. Fortunately or unfortunately, it seems to be helping a lot. When I try to eat peppers, my pain levels go up rapidly. Tomatoes don’t seem to bother me as much, and eggplant is easy to avoid. So I’m having to redo a lot of my recipes to try to reduce nightshades and still retain taste because I generally depend highly on peppers for flavor. This is tonight’s successful and delicious effort. 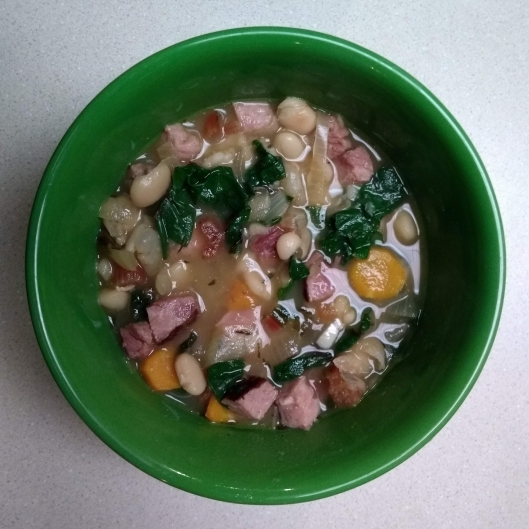 In a soup pot, pour in a few tablespoons of olive oil. Saute onion, chard stems, and carrots over medium heat until onions are almost fully translucent. Add garlic. Saute for another few minutes. Add broth, ham, beans, thyme, mustard, black pepper, and sea salt. Cook until all has warmed through, broth is bubbling and carrots are fully cooked. Add chard leaves to the pot and stir until they have wilted. Remove from heat and serve.

When I first moved to Texas, I had never heard of the New Year’s tradition of eating black-eyed peas and collard greens for good luck. I thought it was rather bizarre since I wasn’t a fan of either of those things. Since then, I’ve learned to love both.

As with all soups, this one is forgiving. There are several options you can make to change it up if you want.

Slice the stalks to the collard greens the way you would with celery for a soup. Shred the collard green leaves into bite sized pieces. In a large soup pot, sauté the onion, bell pepper and sliced collard green stalks together over medium in oil. Once the onion mixture is cooked all the way, add the broth, ham bone, black-eyed peas, garlic and spices. Cook until the beans are soft, about 45-60 minutes. Towards the end, stir in the ham to warm it up. Remove from heat and remove the ham bone. Add the collard green leaves to help cool the soup to an edible temperature and cook the greens.

Makes about 12 cups of soup.

Apologies for the cell phone picture!

In a large soup pot, sautee the onion and sausage together over medium. (The sausage is usually greasy enough that you don’t need to add oil, but if you use low-fat sausage, you might need to.). When the onions are partially translucent, add in the bell pepper. Once the onions are cooked all the way, add the broth, lentils, marjoram and thyme. Cook until the lentils are soft, about 15-20 minutes. Remove from heat and add the frozen kale to help cool the soup to an edible temperature and warm the kale. Makes about 12 cups of soup.

After five months, I’m back!  I had some really rough health months in the time I haven’t been posting, so my blog fell by the wayside.  I did take pictures of some of the recipes I created during that time, though, so I have recipes to share.  I just need to get them up on the web.  Easier said than done!

One of the changes that happened during that five month absence is that I removed black pepper from my diet.  I started getting migraines again, and I wasn’t sure why.  Through the process of elimination, I figured out black pepper was one of the main culprits.  I stopped eating black pepper right before Christmas, and within three weeks I had lost an entire dress size with no other changes.  Weight issues involve far more than just calories, sugar and exercise, but our society often fails to recognize that.

So for the past five months, I’ve been eating simply and eating without pepper.  It eliminated a few more of the very few processed shortcut foods I had (like a few of the Amy’s frozen dinners I could eat), but I’m probably better off without them.  It’s made me become more creative with seasonings rather than just relying on black pepper like so many of us are trained to do.

The soup below was a “use up what’s in the fridge” creation.  Summer squash are about to be overrunning CSA boxes locally, and squash recipes are always appreciated at this time of year.  This recipe could easily use zucchini, yellow, or zephyr squash or any other similar soft squash that you end up with.  Likewise, any type of mushroom that you prefer would work well.

Saute the onions, chile and garlic in the canola oil until the onions are almost translucent.  Add in the mushrooms, squash, parsley, rosemary, and chicken broth.  Cook over medium heat until the squash are tender.  Once softened, use an immersion blender to blenderize the soup.   If you don’t have an immersion blender, transfer in small batches to a regular blender, being careful not to overfill.

While we’re back to warm weather in Central Texas at the moment, I’m sure it will get cold again… eventually.  This made a hearty soup earlier this week when the temperatures were a little cooler.

Sauté carrots, celery, onion, and garlic in oil in large pot for a few minutes until they soften a bit (or stick to the pan… that’s my signal it’s time to move on to the next step).  Add broth, water, herbs, beans, lentils, and tomatoes.  Cook over medium heat until the carrots and lentils are soft (45-60 minutes).  Stir in the greens and allow to cook for 5-10 minutes until the greens are done.  Discard bay leaf before serving.

*If making this vegan, obviously choose the vegetable broth rather than the chicken broth. 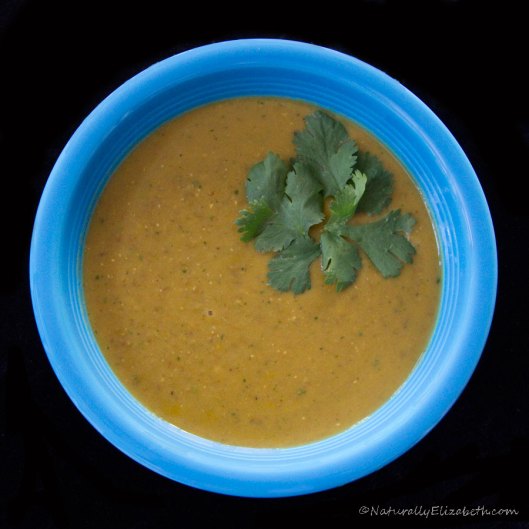 I realize that the soup picture above isn’t the most attractive looking; I used brown lentils in it which isn’t quite as pretty as when I make it with red lentils. It’s hard to make many blended soups look pretty, but this one tastes really good.  One of my sons doesn’t like beans in any other form, but he will willingly eat this soup.  He really likes to add in chunks of leftover baked potatoes to add a bit more texture and substance to it.  We all like to add in smoked sausage.

I often double this recipe so we have lots of leftovers.  It freezes and reheats well.

Sauté the diced onion in olive oil in the bottom of a soup pan over medium heat. When the onion is partially cooked, add in the ginger, garlic, and pepper and continue cooking for a few minutes more.  Add in the curry powder, salt, black pepper, sweet potatoes, lentils, broth, and water.  Allow to continue cooking until the sweet potatoes and lentils are soft, about 30 minutes.  Add in the coconut milk and cilantro leaves and cook for a few minutes more.

If adding in the optional sausage or potato, do so right before serving.

*Use vegetable broth and don’t add in the smoked sausage to veganize this recipe. 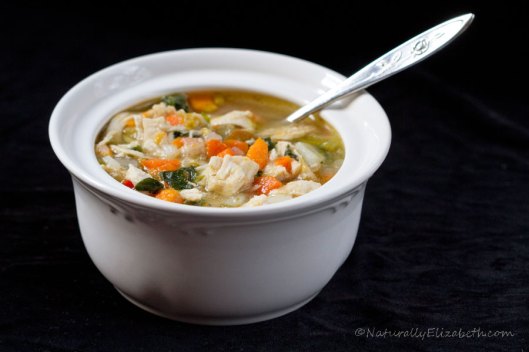 (While it’s a gorgeous 82F outside as I post this, winter will be back to Central Texas tonight with a colder and windy day forecast for tomorrow.  Soup season isn’t totally done around here!)

Like many parents, I struggle to get vegetables in my family.  I may serve the vegetables, but they don’t usually like them.  This is one of the exceptions to the rule.  My boys willingly eat vegetables in the form of soup.

This is a recipe I have been making forever and came up with through trial and error.  It comes out slightly differently each time I make it because I throw in whatever I have around.  I often put in zucchini or yellow squash.  This could easily be cut in half if you aren’t cooking for an army.

Coat  the bottom of an extra large pot with canola oil—I use a 7 quart Dutch oven.  Lightly sauté the peppers, celery, onion, carrots, and jalapeno over medium heat for a few minutes until the onions are beginning to become translucent.  Add the chicken, potatoes, sweet potato, water, garlic powder, sea salt, black pepper, rosemary, thyme, and marjoram.  Raise the temperature to high and bring to a boil.  Reduce to medium.  Continue cooking until the chicken breasts are done and the potatoes are starting to fall apart.  (I cook on an electric cooktop that takes longer than other stoves, so it is about 45-60 minutes on mine depending on the day and how frozen the chicken still is when I put it in the pot, but that’s just a guesstimate).  Remove the chicken breasts from the soup, allow to cool for a few minutes, and dice.*  Return the chicken to the pot along with the spinach.  Allow to cook for a few more minutes to allow the spinach to soften.

This soup will freeze but because of the potatoes in it, it doesn’t freeze well.

A half-batch version of this recipe also works well in the crockpot.  I lightly sauté the onions and then add all the ingredients except the spinach to the crockpot.  I cook on low for 8-10 hours in my 17 year old crockpot that cooks slower than new ones.  I throw in the spinach about an hour before serving.

*I abhor dealing with raw meat, so I choose to dice the chicken after it’s cooked.  You could also dice it raw and then not have to do this step. 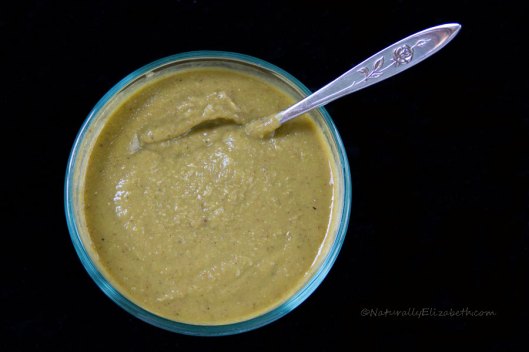 My kids will not eat this soup.  They refer to it as “green concrete” because of the way it congeals in the fridge.  I, on the other hand, love it.  It freezes well, so I will make a huge pot and defrost a jar of it on occasion when I want easy lunches for me.  It is not the most attractive looking soup, but it really does taste great.

This recipe is designed to feed a small army but can easily be cut in half.

In a large soup pot, sauté the onion, carrot, celery, garlic, peppers and cauliflower in a few tablespoons of canola oil for a few minutes.  Add the water, split peas, tarragon, garlic powder, salt and black pepper.  Cook over medium heat until the peas are mush and the veggies are soft.  Add the greens and cook for a few minutes until tender.  Remove from heat.  Stir the red beans in.  Puree with an immersion blender.  Freezes well.